Michael Burnette, AF7KB, started playing with radios at age 8 when he found some plans in a comic book for a crystal radio made from little more than a rusty razor blade, a safety pin, and a coil wound around the cardboard tube from the inside of a roll of toilet paper. The silly thing worked, and he was hooked.

As a commercial broadcaster for 25 years, he did a bit of everything from being a DJ to serving as a vice president and general manager with Westinghouse Broadcasting (now CBS/Infinity.)

By 1989 he owned his own stations in Bend, Oregon, which afforded him abundant opportunities to repair those stations, often in the middle of the night in a snowstorm.

In 1992, Burnette left the radio business behind, and took to traveling the world designing and delivering experiential learning seminars on leadership, management, communications, and building relationships. He has trained people across the US and in Indonesia, Hong Kong, China, Taiwan, Mexico, Finland, Greece, Austria, Spain, Italy, and Russia.

Kerry Burnette, KC7YL, was the original inspiration for the first Fast Track license course, which started as a set of notes for her to use preparing for her Technician exam.

A graduate of the University of Washington, Kerry spent a decade teaching high school math and science and holds a Masters of Education degree.

In addition to her “test pilot” role, Kerry is the editor, proofreader, “proof listener” (for the audio programs) and General Manager of Fast Track.

Kerry came later in life to the world of radio than Michael did, but embraced it enthusiastically and serves as net control for our local club’s weekly net as well as leading the club’s weekly YL net.

Michael and Kerry often appear at major hamfests, where Michael is a sought-after speaker.

Together, they have created:

The Fast Track to Getting Started in Ham Radio

The Fast Track to Your Technician Class Ham Radio License

The Fast Track to Your General Class Ham Radio License

The Fast Track to Your Extra Class Ham Radio License

The Fast Track to (Finally!) Getting on the Air With Ham Radio

Most Fast Track programs are available in paperback, e-book, and audio formats from major online retailers. 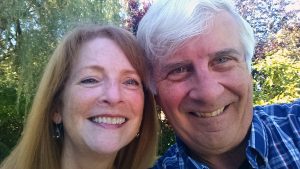